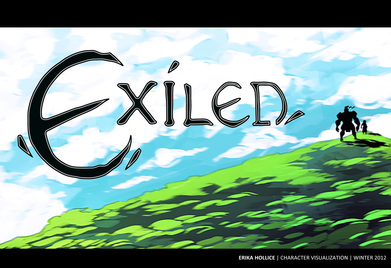 Exiled was created as a concept for a colorful, high-fantasy adventure game. Players would utilize their cooperative partner to solve a multitude of puzzles, navigate ruins, and collect powerful artifacts that are key to the completion of the game's storyline.﻿

Players follow the journey of Lucus and Grigas as they evade enemies and the forces of the raiding invaders, headed by the strong and merciless Miria. Exiled was developed over the Fall 2012 and Spring 2013 semesters. 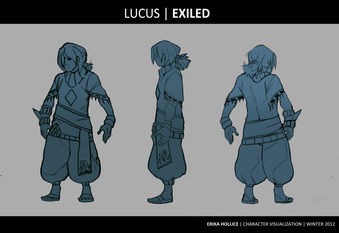 Lucus is the heir to the throne—the exiled prince—driven from his homeland by usurping raiders. He is tasked with rebuilding the alliances of his stolen kingdom, rallying the forces of the land using the might bestowed by the lost artifacts of the ancient rulers.

Lucus is a scrapper and thinks his feet. Despite his brash attitude, he does not confront his enemies head-on. Thus, his clothes were designed for mobility to accommodate his role as a surveyor. Lucus functions as a strategist, engaging enemies in a battle of wits rather than fists. 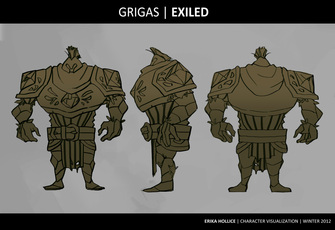 Grigas is a guardian knight powered by the light that passes through his crystal armor. After being replaced by Miria, Grigas is hauled off to rust away in the palace armory. Upon Lucus's escape, he is restored to his former battle capacity and vows himself to the boy until their kingdom is regained.

Grigas is the muscle of the party and the heaviest damage-dealer. While Lucus relies on espionage and subtlety, Grigas takes the most direct approach to threats. His power has limitations, however. Grigas relies on crystal light to operate, and is useless without it. 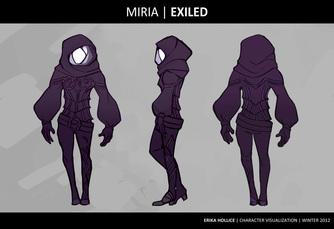 Miria is a streamlined guardian, fitted and prepped for every sort of threat. She replaces Grigas as the knight to the royal family, only to be manipulated by the raiders and aid in their downfall. Unlike Grigas, Miria has a soul and is not dependent on crystal light to function.

Like Lucus, Miria has a focus on mobility. Miria's armor is fitted around her free-flowing spirit and requires substantially less protection in contrast to Grigas who must fully encase the delicate crystal within him. Even her sword is more minimalistic in comparison.
Character Concepts
Exiled follows the exploits of three major characters: the protagonists, Lucus and Grigas, and the antagonist, Miria. Each was carefully designed to embody their strengths and capabilities, as well as their individual identities. This allowed the characters to fit their world without steering towards the unconventional. 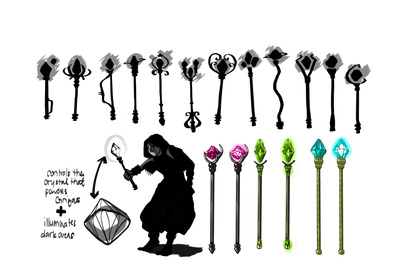 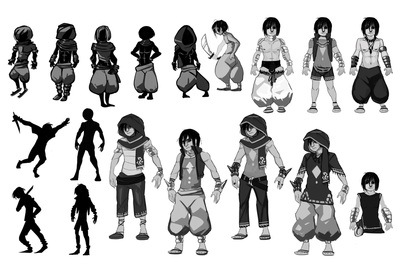 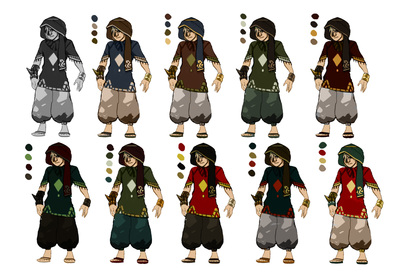 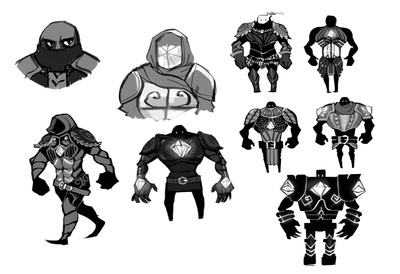 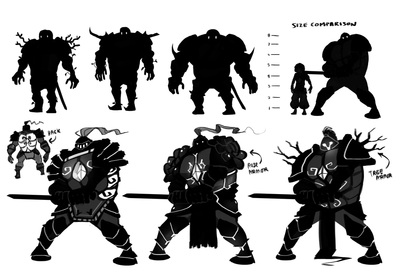 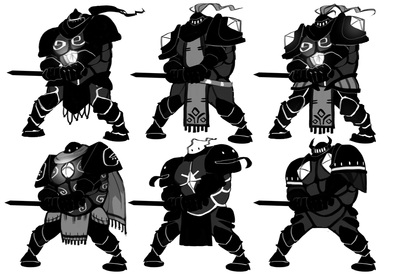 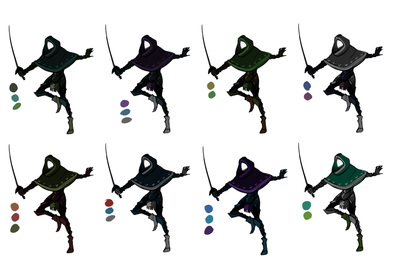 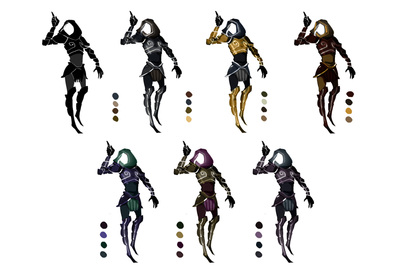 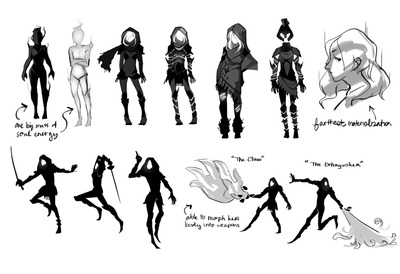 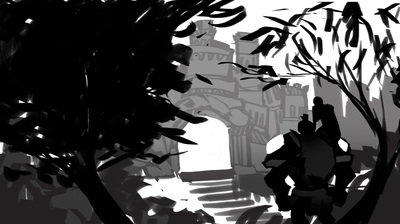 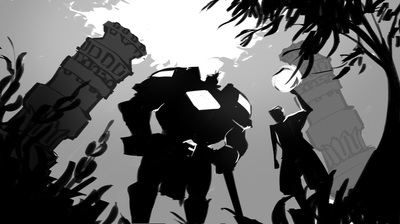 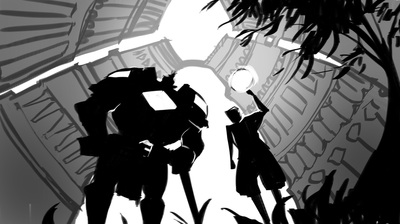 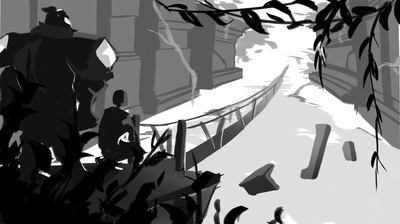 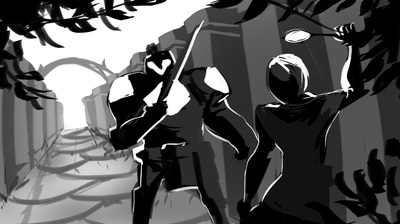 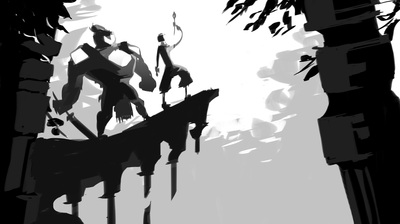 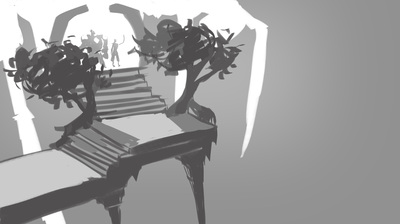 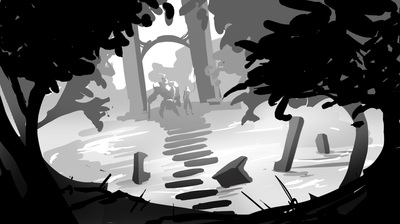 Production
At the end of both concept phases, the characters were put into cohesive, presentable pieces. For 2D Art For Games, I composed a start screen complete with a stylized, hand drawn, font for the logo and buttons. UI elements were also created, styled for play. For Character Visualization, each character was given a sheet with their concepts and a full final render. 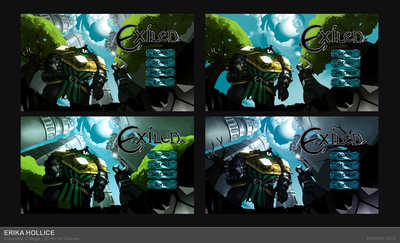 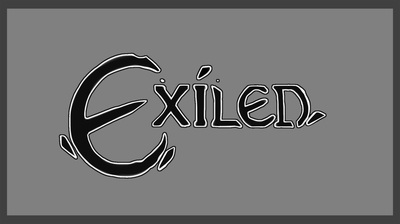 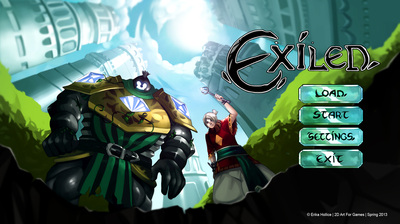 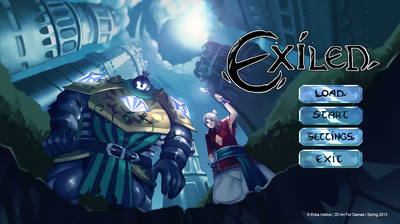 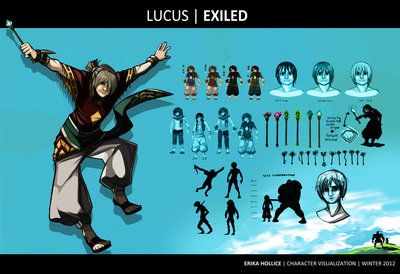 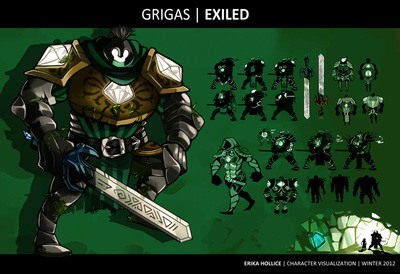 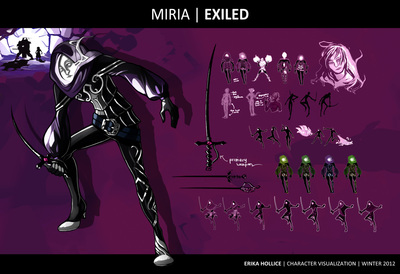 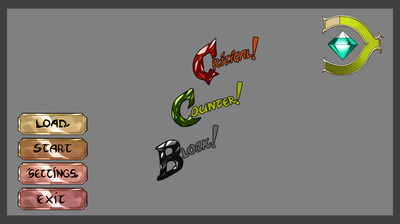