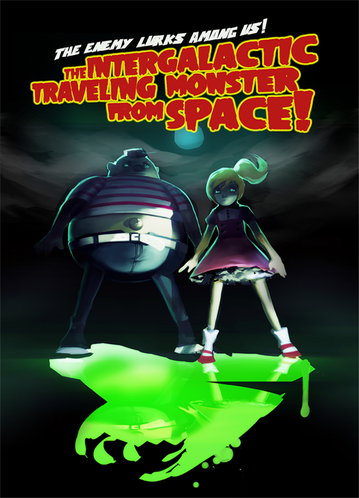 The Intergalactic Traveling Monster From Space was an in-depth project created by our 5-man team — ATAXIA — for Advanced 3D For Games at Columbia College Chicago. The assignment was to create a functioning game environment with animated character models.  We followed the fundamentals of game construction step by step, from concept development to the actual implementation. As an all-artist team, we quickly, and painfully, learned about the trials and obstacles developers and programmers face in their respective occupations.


Using Maya and Unity, we created the eerie suburban town of Sunnyside Acres.
Players compete as a slimy alien, newly-escaped from Area 51. Events bring them to Sunnyside Acres, the small 1950s suburb in the dusty southwest. Their objective is simple: make your way through the city and destroy all humans that stand in their way. However, amidst their birthday festivities, the children of Sunnyside Acres will not go down without a fight.

This project was created by Kent Lam, Osvil Cisneros, Adam Seil, Edwin Reyes, and I for Spring 2014 at Columbia College Chicago.
The Intergalactic Traveling Monster From Space Trailer
View the official trailer for The Intergalactic Traveling Monster From Space below. Be sure to have sound enabled for sweet ear-candy. If YouTube is inaccessible, there is an alternate link to Vimeo here: http://vimeo.com/95090661. The music belongs to our talented team member, Adam Seil. Video production was completed by me.
Workflow & Task Scheduling
This team project allowed me to improve my time-management skills across the board. As individuals, we developed milestones each week which we were independently responsible for. We would then critique each other's work and further improve our contributions before dropping the assets into the game. While this was not necessarily mandatory, our team was dedicated to putting forth the extra effort necessary to create an incredible final product. Here is a comprehensive list of the tasks I completed for The Intergalactic Traveling Monster From Space.

Concepts & Individual Assets
For this team-created project, I was responsible for creating the environmental concepts as well as the enemy designs. To emphasize the otherness and foreignness of the alien, I wanted to push a contrastingly cutesy and colorful element to the town and children.Through this, the player would truly feel like an invasive entity, as opposed to meshing and assimilating into the environment. The biggest hurdle was to accomplish this while keeping everything cohesive.  It was a ton of fun to illustrate this particular dynamic between the player and environment in a way that played off of the actual narrative. As usual, the proof is in the intergalactic pudding. 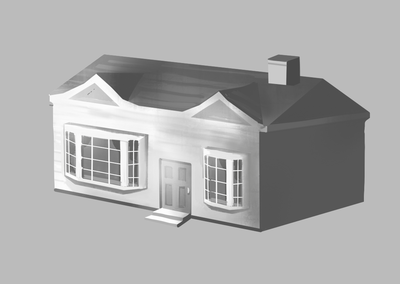 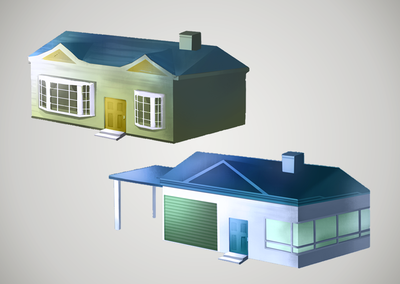 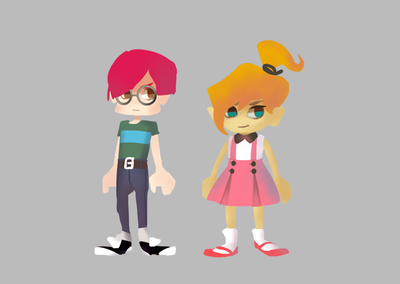 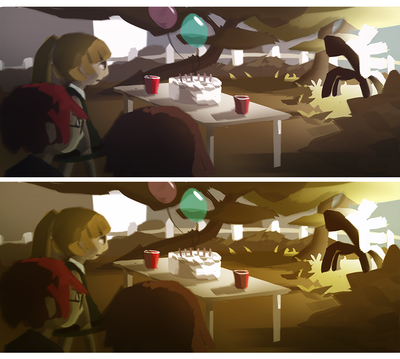 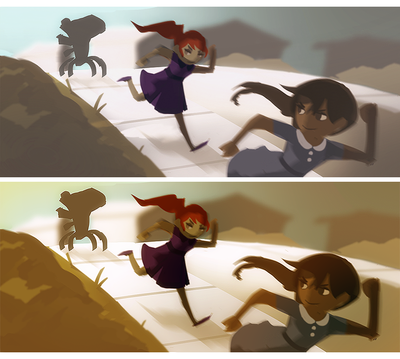 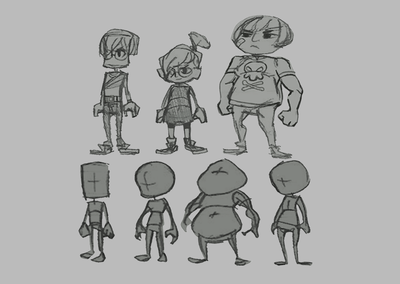 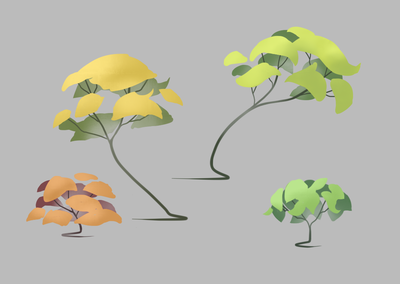 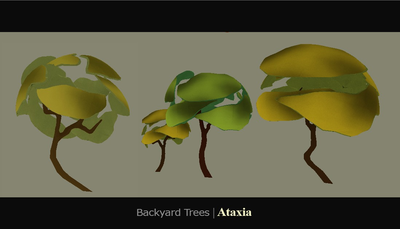 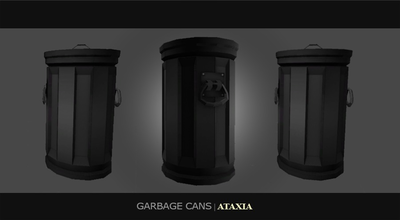 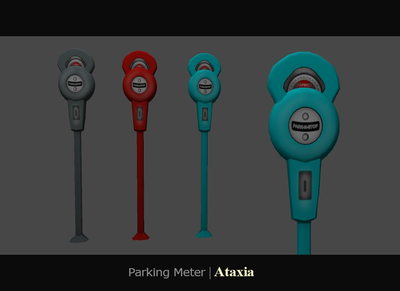 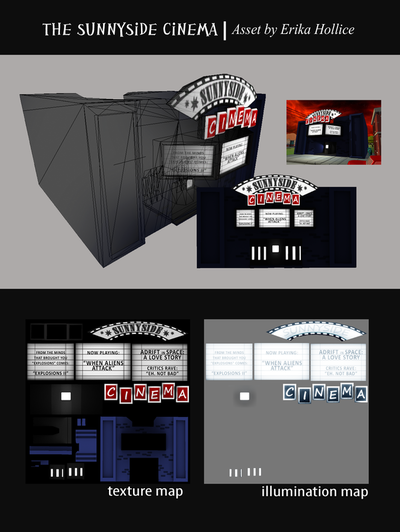 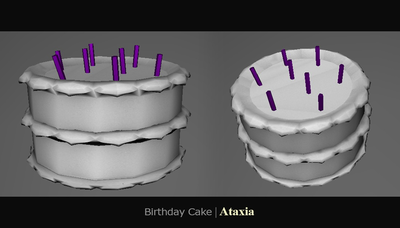 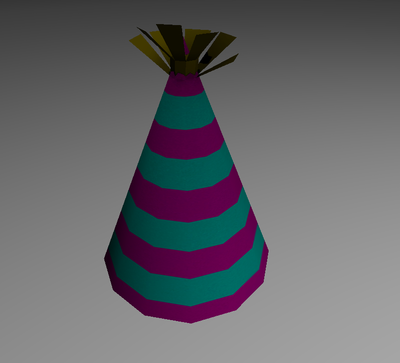 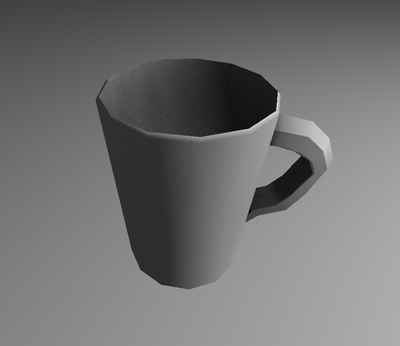 In-Game Screenshots
Here are a few in-game and cinematic screenshots for The Intergalactic Traveling Monster From Space. The cul-de-sac of Sunnyside Acres is divided into three major areas: the neighborhood, downtown, and the highway route. The desert beyond this area is barricaded from play by a length of barbed-wire fencing. 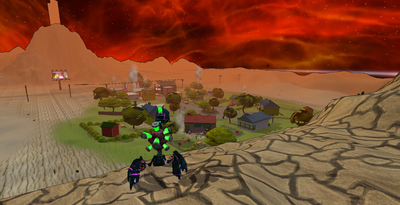 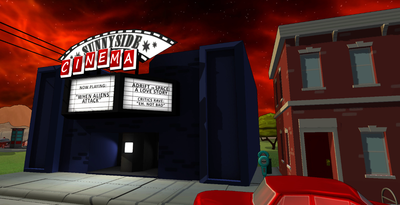 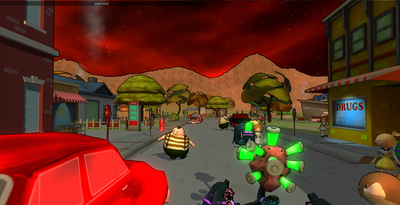 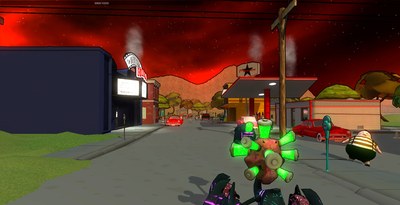 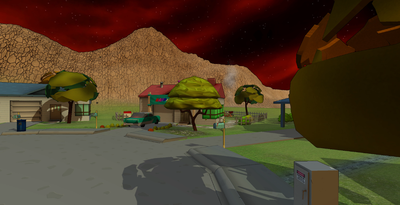 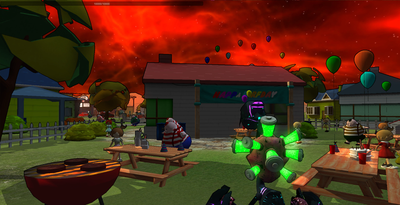 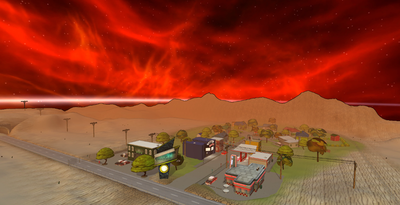 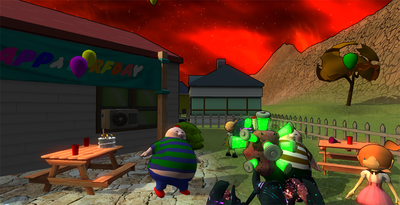 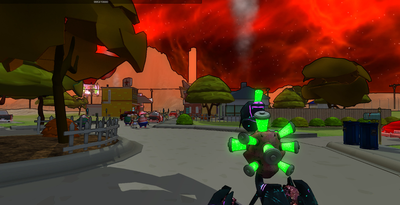